We want to help our patients become informed about the causes, diagnosis, and treatment of gastrointestinal disorders. After all, the more you know about your condition, the easier it will be for you understand and follow your physician’s advice. The following information covers some of the questions patients have about the most frequently occurring gastrointestinal problems.

In the Health Links section of this website, we also have provided links to many websites that we think provide reliable and useful information for our patients. In addition to providing information about various conditions that can affect the digestive system, there are support groups for patients who suffer from chronic conditions.

The FAQs (Frequently Asked Questions) portion of our site contains answers to questions that patients often ask about the test procedures we perform. The information provided includes how to prepare for tests and what to expect during and after these procedures.

The following are some common questions we get at the clinic about common intestinal problems:

Is Barrett's Esophagus the same as cancer?

No, Barrett’s is not cancer. In simple terms, Barrett’s Esophagus is a reaction to longstanding esophageal damage that is caused by corrosive stomach acid back splashing upward. After many years of heartburn, the cells in the lower esophagus begin to transform into a different type of cell resembling that of the intestines. In a small percentage of patients, the cells go on to form so-called dysplasia, or early pre-cancerous changes. Some of these cells progress further to high grade dysplasia, which is closer to cancer and thus more serious.

Can I get ulcers from spicy food?

No. This is a common misconception. For many years, it was believed that peptic ulcers of the stomach and duodenum were caused by what you ate or how you felt. Scientific research over the past decade now has proven spicy foods, emotional stress, and even family history, turn out not to be major causes of ulcer disease. Most ulcers in the stomach or duodenum are caused by one of two things:

Ulcers in the esophagus are different because they are usually caused by the backsplash of powerful stomach acids up into the lower esophagus. If you have ulcers or take aspirin-type drugs on a regular basis, switching to a different medication may allow the ulcers to heal and prevent future problems.

We now know that the majority of ulcers are caused by the Helicobacter infection, H. pylori, for short. Antibiotic treatment has a high success rate in eliminating the infection and curing ulcers for a lifetime.

What is the difference between diverticulosis and diverticulitis?

Diverticulosis is a condition, rather than a disease. The majority of adults have some degree of diverticulosis. It affects the large intestine, or colon. A normal colon is strong and relatively smooth. A colon affected by diverticulosis has weak spots in the walls. These defects allow the development of balloon-like sacs or outpouches – much like a bubble forming on a worn inner tube. These hollow pouches, called diverticulae, occur when the inner intestinal lining has pushed through weakened areas of the colon wall. A single pouch is called a diverticulum. The presence of these pouches on the colon is called diverticulosis.

When the pouches are inflamed or infected, it is called diverticulitis, a more serious ailment.

What is a hiatal hernia?

In simple terms, some people’s hiatus weakens and opens up. This allows the esophagus to “pull the stomach up” into the chest cavity. Since part of the stomach herniates, or pushes through the opening, this condition has been termed a hiatal hernia.

A hiatal hernia is a common finding in adults and may cause no symptoms at all. Sometimes it is associated with a weakness in the lower esophageal valve and can worsen symptoms of acid reflux, or GERD.

Some slip up into the chest one day and back down into the abdomen another. This is called a sliding hiatal hernia.

When they become large and permanently stuck above the diaphragm, they are called a fixed hiatal hernia.

Does red blood in my stool mean I have cancer?

Many patients ask this question. The answer is sometimes, but usually not.  There are many non-cancerous reasons to have blood in the stool such as hemorrhoids, polyps, or fissures.

However, any adults who see blood in their bowel movements should consult their doctor for an examination. You can’t tell what the cause is without having a look inside.

If the doctor does not suspect a serious problem, a simple exam such as a flexible sigmoidoscopy might be sufficient. If there is any concern about trouble further inside, a full colonoscopy is usually advised.

The point is that all bleeding in adults must be evaluated. In most cases, no serious problem is found.

What is irritable bowel syndrome (IBS)?

IBS is a somewhat common disorder in which the nerves and muscles in the bowel are very sensitive and do not function normally. While it is not a disease, it can be a difficult condition to live with. It is characterized by abdominal pain, constipation, or diarrhea. Changes in diet, plus medications and stress reduction can help people deal with the disorder.

What is inflammatory bowel disease (IBD)?

IBD or colitis is a chronic disorder of the gastrointestinal tract involving inflammation of the intestine that results in abdominal pain, persistent diarrhea (often with blood and mucus), and fever. Ulcerative colitis is a serious chronic inflammation and ulceration of the lining of the colon and rectum.

Crohn’s disease is another form of colitis that includes thickening of the intestinal wall. The disease typically occurs in the small intestine near the point where it joins the colon, but other parts of the gastrointestinal tract can be affected. Drug treatment is effective for most patients, but others require surgery.

When does diarrhea require a doctor's attention?

Everyone gets a little “stomach bug” from time to time and develops a bit of diarrhea. The cause is not usually known. Sometimes it’s due to emotional stress, or a virus. Often the cause is unrecognized food poisoning. Some cases are a reaction to the use of antibiotics.  Whatever the cause, most cases are mild and disappear in a few days.  Don’t try to stop diarrhea as soon as it develops.  Diarrhea is the body’s way of getting rid of whatever food, virus, or bug that is causing it.

If the diarrhea is not severe and there is no fever, rectal bleeding, severe abdominal pain, simple measures are usually effective.  This might include going to a BRAT diet for 48 hours and replacing lost fluids. BRATrefers to, Bananas, Rice, Apple Sauce and Tea.

Initially, the main initial concern is dehydration, especially in young children and the elderly. Symptoms of dehydration include fatigue, weakness, dry mouth, dark urine, decreased urine flow. Authorities recommenddrinking at least 8 to 10 glasses of fluid daily while the symptoms are active.  Don’t drink plain water, but instead use a solution such as Gatorade which also contains needed minerals such as sodium and potassium.

If the diarrhea does not respond to fluid and diet changes in a day or two, try one of the over-the-counter anti-diarrheal medicines such as Kaopectate, Pepto-Bismol (will blacken bowel movements), or Imodium AD. Simply follow the label instructions.

Rarely diarrhea is a sign of a more serious infection or ailment.

You should call your doctor for the following reasons:

Get updates, news and GI health tips sent directly to your inbox! 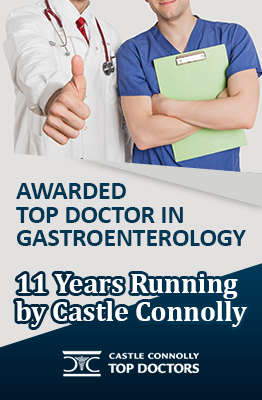